I have mentioned many times in the podcast already how Joe Rogan's The Joe Rogan Experience was the inspiration behind the conception of my own's, The Powerful Komiksman Podcast. I can even state how much this show influenced my life. Now, I just saw the most recent JRE episode, on Youtube as of this writing; his guest was a guy called, Banacheck. I am not familiar with him nor his works, but apparently, he is a celebrity mentalist. The podcast went on with the usual conversa
20 views0 comments

Jump to the comics reading part here. Jump to the review here. Full podcast: Subscribe to the Komiksman Channel to get automatic updates on new videos. At last! Now that I've got the boring podcast introduction episodes out of the way, it is time to produce actual contents for this program in Episode 003 of The Powerful Komiksman Podcast. First off is a comics reading and review video of Batman: White Knight #1, a mini series from DC Comics, written and illustrated by Sean, F
19 views0 comments 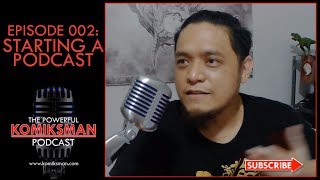 The second episode is out! I had a little break in my schedule and was able to sneak in one podcast session. Well, actually I did two because I messed up my video output settings on OBS on the first try. The video turned out very laggy and sometimes out of sync with the audio. It was so bad, I had to discard that take. Every time I try to record a show, I learn new things about this craft —either through a new discovery or through a catastrophic failure like this one. Either
11 views0 comments
1
2